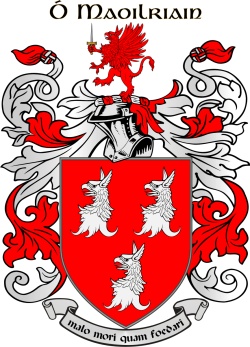 Design your own Ryan Family Crest

Ó Maoilriain - 'descendant of the follower of Rian', anglicised in later times as Ryan.

Ó Ruadháin - 'descendant of Ruadhán, from the epithet 'red', more often anglicised as Ruane, though sometimes as Royan and Ryan.

The first of these surnames although inhabiteding their Munster homelands from early times, were originally a Leinster sept, according to Fr Woulfe in 'Sloinnte Gaedheal is Gall' 1923). In the 13th and 14th centuries they moved to the baronies of Owney and Owney Beg in Tipperary and Limerick. The name Ryan is still most numerous in Co Tipperary.

The second surname is that of a sept in Co Carlow, who were lords of Uí Dróna (Idrone), before spreading in later times throughout eastern Ireland.

The third surname comes from two septs in Connacht, in Mayo and Galway. The usual anglicisation is Ruane, but the name is sometimes disguised, according to Fr Woulfe, as Ryan.

The name occurs as a 'Principal Irish Name' in Petty's 1659 'Census' of Ireland, in the above counties, more often as Mulryane etc in Tipperary and Limerick. The same is true of the 1664 'Hearth Money Rolls' (ed. Laffan) for Co Tipperary, where the name in this form is numerous.

Two Famous Ryans:
William Patrick Ryan (1867-1942) born in Tipperary, was an author and journalist; founder of the socialist newspapers 'Peasant' and 'Irish Nation'.
Francis Thomas Ryan (1862-1927) a member of the US Navy, who received the Medal of Honour for bravery during the Boxer Rebellion
Hire Ireland’s (and the UK’s) best ancestral and genealogy researchers with Ireland101

Tell us about any famous Ryan (or surname variant) you think we should add here. We will get our genealogists to check them out and add them to the list. Thanks!

Join the conversation with the Ryan tribe

My x 3 great grandfather was James Michael Ryan, born in Galway, Ireland abt 1819 (unsure of whether his birthplace is correct). He must have immigrated to Australia at some stage if he was born in Ireland (perhaps with parents). His father was Michael Ryan born abt 1797 in Ireland. His mother is believed to be Honora Shaulsy / Shanley / Brien (in some connected records) birthdate unknown. He married Sarah Ann Kennedy in Australia and then moved to Timaru New Zealand where he drowned in Saltwater Creek in 1867. I am unable to go back any further and would love to make some family connections and get more information about our ancestors, please contact Debi - debij.18@gmail.com

My 2x Great-grandfather. James A. Ryan was born in Thornback, Kilkenny, Ireland 9 Sep 1832 and died in Piatt Co., IL, USA 29 Dec 1900. He had a sister, Agnes, who died a spinster in Troyswood, Kilkenny, Ireland 05 Oct 1907. I am trying to find if he had other siblings. I believe his parents to have been William and Bridget Kirwick Ryan who both died in Ireland, but I am not positive where.

Jenny Miller - my great-grandfather Patrick Ryan and great-grandmother Bridget Treacy came from Borrisoleigh, and also emigrated to Queensland in ~1880. They got off the boat in Townsville, and spent their lives in Charters Towers. Perhaps we are related - Borrisoleigh is not a huge town!!

https://en.wikipedia.org/wiki/William_H._Ryan William Henry Ryan 1860-1939 (son of my family's original emigrants Patrick Ryan, Tipperary and Margaret Brennan, unconfirmed) making William H. a first generation immigrant who served as a US Congressman for two terms 1901-1908, coinciding with the years during which Theodore Roosevelt was President of the US. He personally hosted the Native American Chief Geronimo during his visit to the Pan American Exposition in Buffalo in 1901. [WHR is my father's great uncle and namesake and my father is one of the last living link to have known him. We have not been able to confirm the townlands of Patrick and Margaret. It has been a very stubborn brick wall. Any assistance/suggestions will be greatly appreciated. Thank you! MRF]

My great grandfather Michael Ryan Raymond, was married to two Margaret Ryans (Moneen and Sean Eamon), with a total of seventeen children, the offspring of which includes large conclaves in Australia and USA. His grand father was also Michael Ryan (1764) married to Johanna Kilfoyle. They hailed from Foilnacanna in Upperchurch, but my g. grandfather moved to Glenough, and we still have a strong presence on the old ancestral lands. You can view the school attended by our family since it was established in 1856 by visiting Glenough Schoolhouse on Facebook. Regards, Don Ryan .

My 3rd great grandfather was Denis Ryan born 1825 in Tipperary. Emigrated to Australia with his mother Margaret D'Arcy in 1856, married Martha Manson in Victoria Australia in 1861 and he and his family emigrated to New Zealand. His father was either Patrick Ryan or Michael Ryan - this differs on two different certificates. My Ancestry tree is https://www.ancestry.com.au/family-tree/tree/158399137/family/familyview and happy to provide a Gedmatch number if you would like to contact me. Regards. Denise

Great grandfather John Ryan from Limerick immigrated about 1850 to Essex County, Ontario Canada. Adopted by Langlois family. No other documentation or information available. Any help much appreciated. Bonnie Ryan Beaudry

Our Ryan's come from Bottomstown, Murroe, Limerick. That is about all I know except my grandfather said the Ryan girls were known to be great beauties and his grandmother was Mary Ann Ryan O'Maley. If anyone can elaborate on the family, please let me know. Thank you and God Bless you.

Am an only child with little facts re my great grandparents. Patrick Ryan was killed in a railroad accident in Youngstown, Ohio in 1892. He left his wife, Ellen Muldowney from Kilkenny, per her obituary, and 3 almost adult grown children. John Patrick is my Great Grandfather and then Edward M and Mary. John P died in 1919, leaving my Grandma, Anna McVey, with 3 children under 6. John, William Grant and Mary. Dad is William (1912-1991). Any help would be appreciated. Some day, I hope to see photos. Rosemary

(Part 1 of 3) The Ryan name has a long history in the British Isles, but now DNA and some recorded history says its origin is from the south-west region of the Emerald Island. The Ryan story [dominated by DNA tribal marker R1b-L513, Subgroup O2] can trace their beginnings to what is now County Kerry from 50 BCE. Perhaps the journey begins with the Clanna Dedad; Deda, son of Sen or Deda Mac Sin. The Ryan surname origin is possibly a branch of what will become the Dáirine [R1b-L513] who are found in south Ireland around 300 CE.

(Part 2 of 3) According to research, the Dáirine will join with the Dál Riata of north-east Ireland and invade Scotland around 500 CE. But how could this be? Recent discoveries from DNA testing are unlocking the migration patterns of Celtic tribes as late as 800 CE to 1200 CE. The Ryan story begins in pre-history Ireland but many of his descendants will then move to Kintyre, Scotland where they and other R1b-L513 members will form the Dalriada. This line and many of his kin will then travel to Brittany, France during the Dark Ages.

(Part 2 of 3) According to research, the Dáirine will join with the Dál Riata of north-east Ireland and invade Scotland around 500 CE. But how could this be? Recent discoveries from DNA testing are unlocking the migration patterns of Celtic tribes as late as 800 CE to 1200 CE. The Ryan story begins in pre-history Ireland but many of his descendants will then move to Kintyre, Scotland where they and other R1b-L513 members will form the Dalriada. This line and many of his kin will then travel to Brittany, France during the Dark Ages.

My great grandfather Matthew Ryan was married to Hattie Hookano in Hawaii sometime in the early 1900s. Our ancestry family tree can be found here trees.ancestry.comtree16268950familyfamilyview if you are related to me or know anything more about my family tree please feel free to contact me through ancestry.com.

Areas of Origin for Ryan

Write an email address and click 'Invite' to share this page with more members of the Ryan tribe.

Discover where the Ryan Family members live around the world

Show off the Ryan Family Crest…