Ireland's main International airports that service flights from America are Dublin and Shannon. Irish airports that service Europe and internal flights include Cork, Belfast, Galway, Knock, Sligo and Derry. If you are flying from America and want to get straight into the heart of the country its probably best to fly direct to Shannon airport which will leave you an hour or so drive from Galway to the north and a couple of hours drive from southern attractions in Kerry and Cork. Arriving in Dublin airport is still worthwhile but it is just a busier airport. However compared to any of the major US or European airports it is smaller. 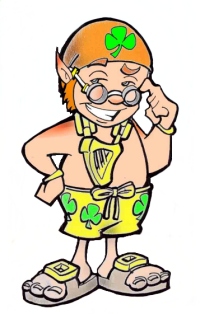 Dublin is like any other international airport. Departures are on the first floor, arrivals on the ground floor. There are a number of ways to get into Dublin city. The taxi rank is on the ground floor on the right as you exit. The ‘Dublin taxi driver’ wit is something quite famous in the city. These, primarily male, taxi drivers tend to be able to give you the latest issue of the day that Dublin is talking about, e.g. politics, Bono, that monument over there. For many an Irish emigrant they know they are truly home when they hear the scandal du jour of the Dublin taxi driver. Don’t forget to ask the taxi driver if he has ever met Bono. Actually, ask most Dubiners for their ‘Bono sightings’ and it will give you a laugh. That said, those famous taxi drivers have a checkered history with the local Dubliners due to the historic lack of available taxi’s in Dublin once the pubs close. When the pubs close in Dublin tens of thousands of tippsy Dubliners end up standing in line for hours waiting for the all too few taxis available (usually in the rain).

You can also use the buses that the local Dubliners use which are only a fraction of the above costs (~2 euro).

Fair enough you have more stops on these buses but every penny you save in Dublin getting there can be invested in more beer!

The rest of the aiports are relatively small and its easy enough to work out how to get to your destination but for specific details see the airport's specific websites.