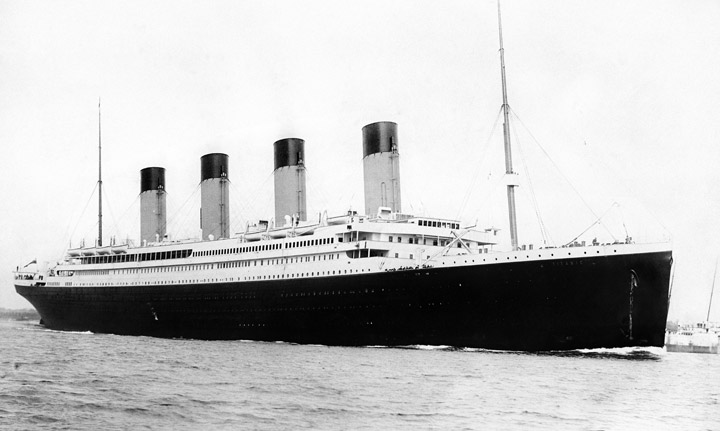 The Titanic was built at the Harland and Wolff shipyard in Belfast, Northern Ireland.

RMS Titanic was a passenger liner that struck an iceberg on her maiden voyage from Southampton, England, to New York City, and sank on 15 April 1912. She struck the iceberg four days into the crossing, at 23:40 on 14 April 1912, and sank at 2:20 the following morning, resulting in the deaths of 1,517 people in one of the deadliest peacetime maritime disasters in history.

The largest passenger steamship in the world, the Olympic-class RMS Titanic was owned by the White Star Line and constructed at the Harland and Wolff shipyard in Belfast, Ireland. She set sail for New York City on 10 April 1912 with 2,223 people on board. The high casualty rate resulting from the sinking was due in part to the fact that, although complying with the regulations of the time, the ship carried lifeboats for only 1,178 people. A disproportionate number of men died due to the "women and children first" protocol that was enforced by the ship's crew.

Titanic was designed by experienced engineers, using some of the most advanced technologies and extensive safety features of the time. Adding to the ironic nature of the tragedy is the fact that the liner sank on her maiden voyage. The high loss of life, the media frenzy over Titanic's famous victims, the legends about the sinking, the resulting changes in maritime law, and the discovery of the wreck have all contributed to the enduring interest in Titanic.

Titanic was designed to compete with the rival Cunard Line's Lusitania and Mauretania. Titanic, along with her Olympic-class sisters, Olympic and the soon-to-be-built Britannic (which was to be called Gigantic at first), were intended to be the largest, most luxurious ships ever to operate. The designers were Lord Pirrie, a director of both Harland and Wolff and White Star, naval architect Thomas Andrews, Harland and Wolff's construction manager and head of their design department, and Alexander Carlisle, the shipyard's chief draughtsman and general manager. Carlisle's responsibilities included the decorations, the equipment and all general arrangements, including the implementation of an efficient lifeboat davit design. Carlisle would leave the project in 1910, before the ships were launched, when he became a shareholder in Welin Davit & Engineering Company Ltd, the firm making the davits.